If you want to improve the air circulation around your home, office, bedroom, kitchen, or any other kind of space, the easiest solution is to install a ceiling fan.

However, finding the right fan can be challenging. There is a vast array of models and brands on the market, and it can be challenging to understand the differences. You’ll need to consider the airflow capacity, noise, operation, durability, style, and much more.

In this comprehensive guide, we’ve taken a closer look at the best ceiling fans that will not only cool the air around your home but also improve and enhance your interior décor. 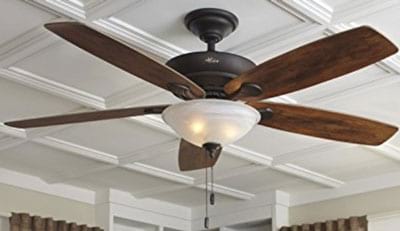 It features a reversible five-blade and three-speed motor that is quiet and smooth, cooling your environment in both summer and winter. Additionally, the Honeywell Carnegie is remote-controlled and comes complete with an LED light kit and a light dimmer for convenient operation.

The Hunter Builder Ceiling Fan makes it on our list as the best value ceiling fan.

It comes with two 6.5-watt dimmable LED bulbs, and an on/off pull chain that regulates operation. This fan comes with 2 and 3-inch down rods that ensure there is enough distance between the fan and the ceiling, thus enhancing airflow.

With the 159-RPM reversible motor, you can change the direction of your fan to flow upwards in winter, and downwards in summer, saving you energy. The fan blade has a flat pitch of 12 degrees. This guarantees the right amount of airflow.

Do you have low ceilings in your home?

The Prominence Home 50853 Hugger Ceiling Fan will suit your needs. It is a flush-mounted ceiling fan that has a beautiful matte-black finish with reversible fan blades and a three-speed reversible motor.

This fan is suitable for medium-sized rooms where extra space is needed. The frosted bulb also allows for light to be evenly distributed throughout the room.

If you are looking for a durable ceiling fan that is simple and elegant, then this Hunter New Bronze Ceiling Fan will do the job.

Consisting of durable materials that will last for many years, it has an award-winning installation design. A four-speed reversible motor circulates air efficiently with a CFM of 6595, making it perfect for large rooms.  The light and fan speeds can also be adjusted either by using the pull chain or the remote control for the utmost performance.

Its 52-inch blades enable it to circulate a large amount of air in medium-sized and large rooms. It is damp rated for outdoor use, making it the perfect choice for verandas, gazebos, or other outdoor spaces.

It is tri-mount compatible, and you can adjust the speed by using the remote control or the pull chain. The blades are quite durable with an attractive bronze finish, and weather-resistant, making them an excellent choice for outdoor spaces.

If you never compromise on quality products, the Co-Z Contemporary Ceiling Fan is the fan to buy. This product is also UL-approved and certified for sustainability and safety.

The fan blades are sturdy and made of rust-resistant plastic materials, with a beautiful nickel finish that adds durability. Its unique design makes it ideal for bedrooms and living rooms. The silicon steel AC motor allows for dynamic, yet whisper-quiet air circulation.

You can adjust the fan speed, direction, and switch the fan on/off using the remote control without having to get up from your seat or bed. The LED light kit included allows you to change from brilliant white to a dimmer “warm” white as per your preference.

Minka Aire needs no introduction when it comes to ceiling fans. This brand is renowned for making sleek, minimalist designs that blend in with any décor. The Minka Aire Concept Ceiling Fan is no exception.

It has white opal-shaped glass housing with a 14-W LED light bulb that is remote-enabled. This fan also features a reversible motor for both winter and summer seasons. It has a smooth and quiet operation. You’ll hardly know it’s there, which makes it perfect for bedrooms and night-time use.

The Big Air 88-inch Industrial Ceiling Fan is among the best ceiling fans on the market for industrial use. Enhance the décor and cooling system of your bedroom, office, or outdoor space with this unique and state-of-the-art fan.

The DC motor is structured to save on operating costs, up to 65%, compared to traditional AC motors. The fan also features nine reversible blades with a massive span of 88 inches. This allows for highly-efficient air circulation in large rooms of up to 1547 square feet.

This beautifully-designed fan also comes with a 6-inch down rod, a one year warranty, and it is wet-rated for any location, indoor or outdoor.

This Harbor Breeze Mazon Ceiling Fan comes with an LED light and a modern style that enhances any room. It is the perfect fan for small to medium-sized rooms such as home offices, bedrooms, or living rooms. The flush mount is also suitable for rooms with low ceilings, and the 18-watt LED lights are dimmable to change settings as per your preference.

This fan comes with a reversible three-blade motor that for warm air in the winter and cool air in the summer. With a CFM of 4545, you are guaranteed maximum airflow to all corners of the room. 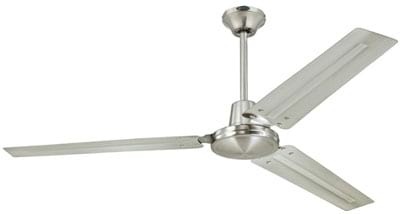 This Westinghouse Lighting Industrial 3-blade fan is our best budget pick. Despite the elegant design that makes it look quite expensive, it is one of the more affordable fans on the market. The three blades—with a span of 56 inches—easily cool medium to large-sized rooms with a decent airflow capacity of 5973 CFM.

Its high-powered reversible DC motor, down rod, and control unit makes this fan ideal for high ceilings. It comes with a two-year warranty on all parts, and an incredibly generous fifteen-year warranty on the motor. 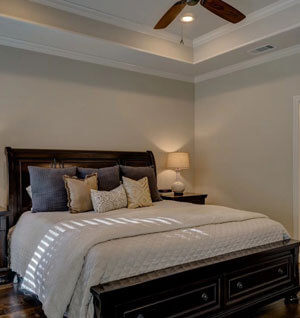 All the ceiling fans in our review are sophisticated, authentic, and deliver excellent performance. They will help keep you warm during winter and cool during summer, maximizing your comfort and air quality.

Ceiling fans come in a variety of different designs to accommodate your budget and match your home, office, or outdoor décor. However, in our review, the Honeywell Carnegie 52-inch Indoor Ceiling Fan emerged as the top pick. It is affordably priced, durable, offers reversible motor action, and comes with an extra down rod for both standard and high ceiling installation.

It is also remote-controlled and tri-mount compatible. This fan is very durable and has excellent features that warrant the price, topping our best ceiling fans list.

How to Choose the Best Ceiling Fans

For you to get maximum performance from your ceiling fan, allow at least 8 to 10 inches of clearance between the fan blades and the ceiling, and at least 18 inches between the fan and the nearest wall. Large rooms require large fans, and small fans are only suited for smaller rooms.

Ceiling fans with a CFM rating of 3500 – 4000 deliver a standard performance. Many ceiling fans deliver between 5000 – 6000 CFM, which gives you significantly better airflow. However, there are premium fans in the market that have CFM ratings of 9000 or more.

One of the more neglected factors when buying a ceiling fan is the style of the fan itself. After all, this appliance needs to blend in with your interior décor. Ceiling fans come in a variety of styles from farmhouse and rustic to modern and minimalist. To avoid installing an eyesore, be sure to choose a fan that matches the style of your home.