Small, floating pollutants are an inevitable side effect of human life and industry. These air particles were linked to around 7 million deaths in 2012. Wherever you go, whether it is to work, school, your children’s soccer games, or a shopping mall, you are exposed to pollutants in the air.

You can avoid the hassle of changing filters and incurring unexpected expenses by springing for a filterless model. These are the best filterless air purifiers.

In a Rush? Here’s our winner..

For an absolute best-in-class pick, look no further than the Envion Ionic Pro Platinum. This little unit’s appearance may not amaze, but its performance surely will. Its negative ionic operation sanitizes and removes 99.9% of airborne allergens and irritants, including cold and flu viruses, mold spores, and other bacteria.

It’s also a unit that fits nicely into any room. This is because of its space-saving tower design and the fact that it runs entirely silently, meaning you won’t be disrupted at work, play, or sleep. It also uses less energy than a compact fluorescent bulb. Get your hands on this excellent filterless air purifier today. 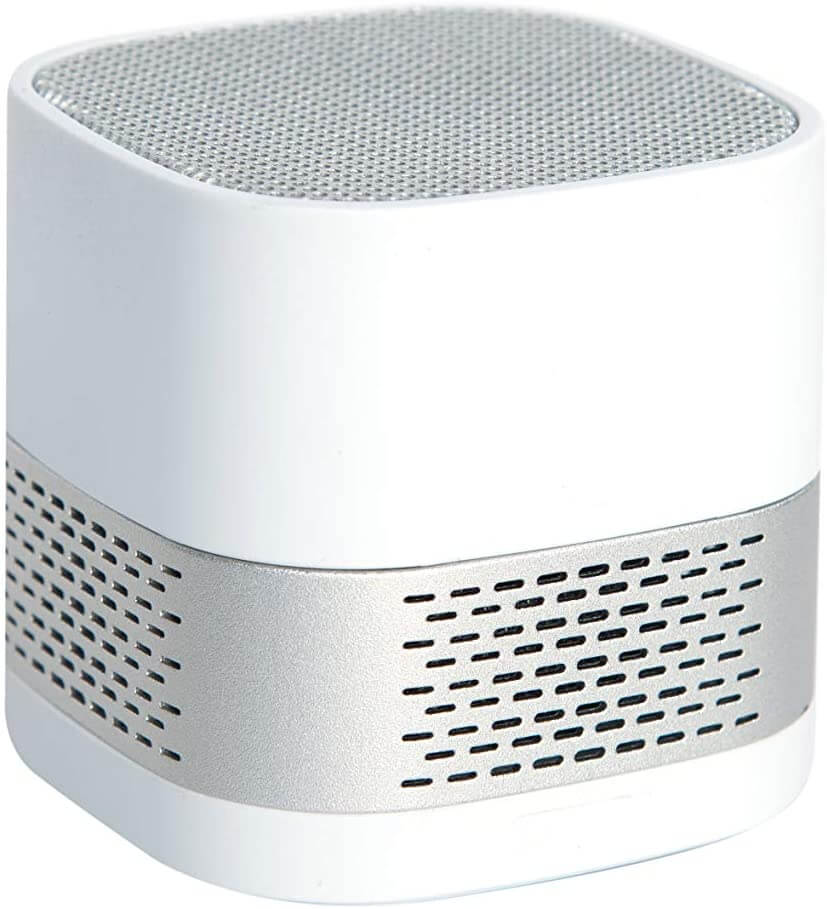 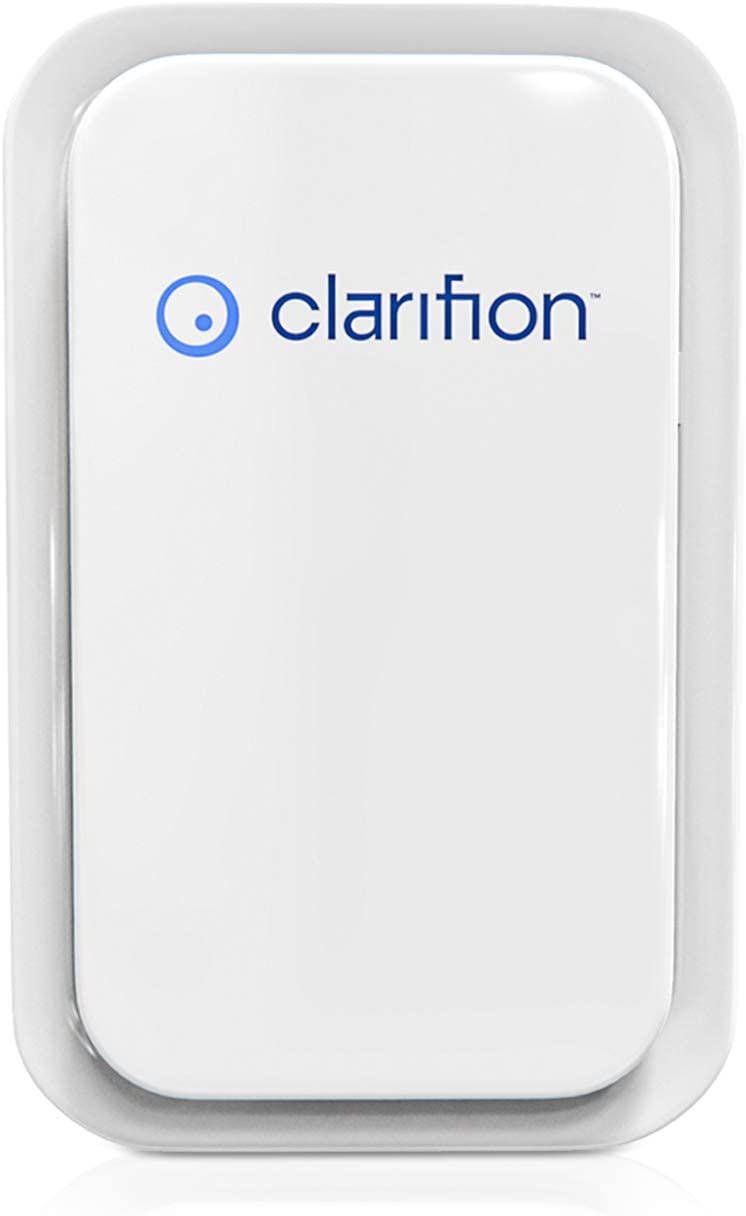 It’s a shame for the other purifiers on this list that they have to follow the star performer called the Envion Ionic Pro Platinum. It’s got everything going for it.

You’ll also save on energy bills as this purifier uses about as much electricity as your average lightbulb.

These features are a dim light compared to its purifying power. The unit can clean a room’s air up to 3 times per hour and traps particles down to 0.1 microns, meaning it catches the pollutants most likely to settle deep in your lungs.

It’s also equipped with a set of different operational modes that allow you to control the filtering power, from low to high. Even better, regardless of the mode, it runs without any ambient noise. The lights are even dimmable, making it the perfect discreet unit for any environment.

This unit is likely a solid fit for you if you need an air purifier. Its exceptional purifying power, combined with its discreet operation, makes it the perfect choice for any room.

Where other filterless models tend to use ionic technology, ozone emission, or UV light, the Airfree T800 operates entirely via proprietary technology.

Despite this operation difference, it still does its job well, with a purifying power of 99.99% that targets mold, pollen, and other organic allergens. It also reduces ozone levels in the area, so you’ll have safe and clean air, all in one.

The one downside to this unique model is that Airfree designed it specifically for small spaces of up to 180 ft2. If you want to purify a room any larger than this, the unit quickly loses its effectiveness.

This makes sense, given that the price point is exceptionally low. In spite of this shortcoming, it is an affordable, smart, and safety-conscientious purchase for the smaller rooms in your home.

Get this model if you don’t have large rooms you want to purify. If you’re looking for an affordable, effective purifying solution, you’ll find it in this unit. 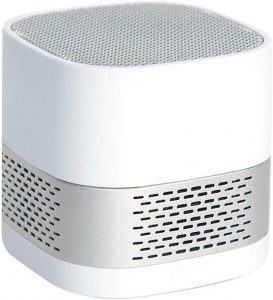 What we liked about this unit is its ability to tackle bad smells and odors with ease. It can capture organic gas glue, as well as the organic matter in cigarette smoke. After containing these particles, it decomposes them, taking them completely out of the air and leaving your room smelling fresh and crisp.

It uses USB Type-C to power itself, a universal interface that makes it easy to find the wires you need. Thus, it also uses very minimal energy and should only cost $2 per year or less for related utility bills.

One minor quibble we had is in regards to the maintenance of this cube unit. The metal mesh has to be rinsed and washed after every 2 weeks of usage, which is a bit more often than we wanted to deal with.

Overall, this purifier is still exceptional, and we can’t help but love its cute cube shape.

If you’re in the market for a filterless air purifier that is pleasantly designed, easy to run, and easy to match with your furniture, this model is right for you. 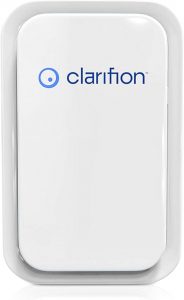 The best thing about the Clarifion Negative Ion Generator is that it’s no larger than your average air freshener. This makes it perfect for tossing into a travel bag and bringing it wherever you go.

However, this unit is NOT a permanent one. It comes in packs, and it is expected that you’ll have to replace it. We found that it ran fine for the week we had it, with other reviewers reporting a life span of 2-3 years. So, yes, it does need to be swapped out, but not for a long time.

Since it covers a relatively small single room radius, you may find that you want more units just to put around the house.

It needs to be plugged in to run, so ensure that wherever you travel to has compatible outlets. The plug-in feature makes it very easy to set up almost anywhere.

For travelers and those with limited space who still want nice breathable air, this unit will do the trick anywhere you plug it in in your home.

The key selling point of the PurifiedO2 Portable Ozone Generator and Ionic Air Purifier is its ability to tackle even the harshest smells.

The additional oxygen particle it emits attaches to other molecules like smoke or mold and eliminates them with ease. Because of this, you can count on it to handle the strongest scents.

It also pulls double-duty as a negative ionic purifier. Between the 2 different modes of operation, it can kill 98.5% of airborne pollutants.

While it functions well, there is one caveat. Since it uses ozone technology to function, it is not as safe as other units. If you’re going to use it, make sure that you’re not in the room when it’s emitting ozone. Thankfully this is easy to do, given the fact that you can control it via 2 automatic ozone cycle modes.

Strong smells can ruin a room. If that’s your issue, get this air purifier that is perfectly designed to tackle these odors at the root cause. 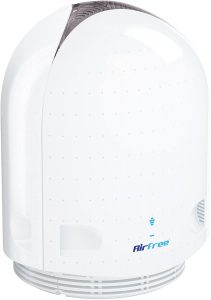 The Airfree P2000 can clean 99.99% of air impurities, which is exactly what you’re looking for from any purifier unit. Interestingly, it also removes 26% of the surrounding ozone out of the air, which is excellent because that substance has been linked to asthma and lung tissue destruction.

We also liked its night light function. It gives off a very soothing blue light that we think would be great for kids (and adults) who still need some illumination while they’re trying to sleep. It’s adjustable too, so you can set it to the brightness that makes you most comfortable.

What I liked less was its high price point. It’s CONSIDERABLY more expensive than many other units here, and while it compensates for this by having a larger area of effect – enough to cover 550 square feet – it was still painful on my wallet.

Get this unit if you have a slightly larger room. It’ll cover the radius you need for purifying and cleaning a medium-sized space.

Perhaps the first thing you’ll notice about this purifier is its elegant contoured design. It boasts smooth curves and a thin, tall design that makes it look a lot like a sci-fi version of the flower the Airfree Tulip is named after.

Of course, a purifier is nothing without the ability to clean the air. Using unique heating technology, it sucks in contaminated air via a natural air convection system, heats it to 400°F, then cools it before sending it back into the room. Through this mechanism, it cleans nearly all airborne pollutants.

It also has features that make sure you’re using it correctly and safely. If it’s off-balance or tipped over, the light will blink, letting you know before any problems arise.

If you’re looking to add a touch of class to your room while also getting a high-functioning air purifier, this unit is the right choice for you.

How to Choose the Best Filterless Air Purifier?

Many filterless air purifiers are very cost-effective, often available at around a hundred dollars or less. However, even with this affordable price point, it’s still essential to find the right size and features for your home purification needs.

Filterless air purifiers do not take particles out of the air. They only process the particles and kill microorganisms. This is sufficient to take away many of the unhealthy particles and allergens floating in air.

If you’re okay with this, you should first consider how it purports to clean the area. Some use ozone, which effectively removes smells, but you must be out of the room during this process.

Others use negative ion technology that weighs down air molecules, dropping them to the ground for easy vacuuming. Ionizers can sometimes emit ozone as well.

Some models feature proprietary technology that uses heat to kill harmful microorganisms floating through the air.

Almost always, filterless air purifiers will include what percentage of airborne pollutants they’re capable of removing in a specific square footage. Typically, you want higher percentages because that means the air will be cleaner.

Many of these models also tell you the size of the pollutants they can clean. The smaller the size (for example, 0.02 microns), the cleaner and purer your room’s air will be.

You want to consider how your filterless air purifier runs. For instance, most filterless units have at least three modes, ranging from low to high power.

Others may include auto modes that self-control their function, silent modes that run quietly, or ozone cycling modes to control when ozone is emitted, if relevant.

Most of the time, the more modes there are, the better, as it gives you more control over your air’s purification.

You also want to consider how your air purifier is powered. Some plug directly into a wall socket, while others use rechargeable batteries. Whichever method is most convenient for your home may make the difference in your chosen model.

Most filterless units tend to be very quiet because they don’t need fans’ power to suck in air matter. Units that heat sterilize are entirely silent.

Ionizers and photocatalytic units tend to make more noise, but they WON’T deafen and can act as pleasant white noise even at the highest settings.

The choice here is entirely up to you.

If you need an air purifier fast and don’t care to spend too much time shopping around,  get the Envion Ionic Pro Platinum.

Its filter-free design removes hidden replacement costs and makes it exceptionally easy to clean and maintain.

It’s also got a set of different modes that let you finetune your purifying levels.

Most importantly, it purifies air exceptionally well, catching particles down to 0.1 microns in size at a room cycling rate of three times per hour. Just find a space to set it up, which is easy to do given its space-saving tower design, plug it in, and enjoy the fresh air in your home.