I’m fond of saying that every brand has a theme. Any brand, for any product. I’m not sure if it’s due to intentionally trying to differentiate themselves from the competition, finding a niche, or just different philosophies on what makes quality, but every tankless water heater brand is different as well.

Today we’re talking about Rheem, whose theme can be summed up as being pretty much the best brand for residential uses.

Every brand makes residential tankless water heaters, of course, but each has its own specialty. Rinnai mostly specializes in light to medium commercial units, with their residential models often being overpriced. Ecosmart specializes in Point of Use models like Rheem EcoSense.

Rheem specializes in having an affordable, high-performance residential model for any size home you’d care to imagine. Today we’re going to talk about five of my favorites, and why they make it to the top of my list.

I use a few uncommon abbreviations and terms in this article, which I’ll quickly explain here:

British Thermal Unit (per hour), the amount of heat required to heat one pound of water one degree. The higher this number, the hotter your tankless water heater.

Gallons per minute. In this context, how many gallons per minute a tankless water heater can effectively heat without starting to output cold bursts. Bigger is better, once again.

A condensing heater keeps the propane or natural gas more highly compressed, resulting in more efficient heat output that isn’t as affected by the weather. Non-condensing units (the majority) lack this feature and may perform up to 50% less efficiently in cold weather. 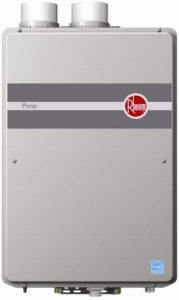 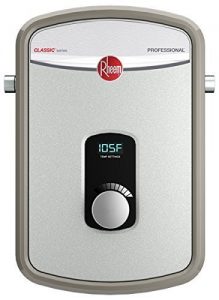 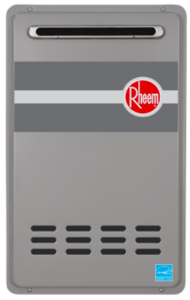 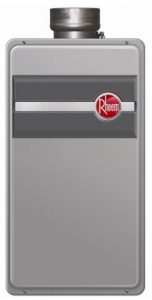 One of the best tankless water heaters by any brand on the market today.

Rheem tankless water heaters are great because, as I mentioned above, they have a host of great quality of life features for consumers (the Prestige series especially). This one is no exception.

In addition to its very nice 9.5 GPM and 199k BTuH maximum (11k BTuH minimum) from a 93% efficient condensing heater, desirable basic stats in their own right, and on top of that it has a host of extra features that puts this a cut above most other tankless water heaters.

Some practical, some luxurious, but all are great. Let’s start with the practical:

First off, it has an exclusive maintenance notice system, which sends you alerts when it’s time for routine maintenance. Great if you’re forgetful like me.

Additionally, it is digital controller capable or can be controlled by a mobile app if you prefer. More helpful for outdoor models, but convenient for indoor ones as well. To round things out, it has ultra low NOx emissions and is protected against freezing to temperatures as low as -30 degrees.

For the more luxury additions, it has “hot start programming” that prevents cold bursts from back to back usage of water. Usually, when you turn off your faucet’s hot water knob a tankless hot water heater IMMEDIATELY shuts off and you entirely lose hot water while it builds back up again if you go to turn it on even a few seconds later (since it heats water as it flows through, it isn’t just dispensing pre-heated water).

In this case, the programming can be set to avoid this problem by running the heater a little bit after the faucet is shut off.

On top of that, this particular model has a recirculation kit as well, which will run your hot water back through your cold water line when told to (it’s a toggle, but can be set to do so automatically at certain times of day), increasing efficiency even more.

All told those two features actually belie the 9.5 GPM figure given, as it ends up being effectively much more than that. You end up with more hot water while putting less stress on the heater, allowing it to perform better in cold climates particularly since once the water is heated it can be recirculated to make full use of it instead of wasting most of it.

Given all that, I feel the roughly $1700 price tag is more than fair for what you’re getting, especially if you live somewhere with colder groundwater (where tankless water heaters often strain themselves). 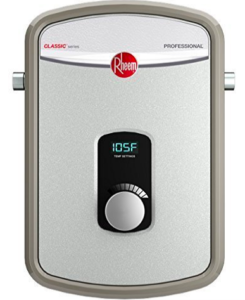 Smaller and weaker, but that’s kind of the point.

At first glance this one seems pretty weak. It has 1.5 GPM of flow (you can eke out close to 2.0 GPM in very high temperature climates with groundwater at or above 70 degrees) and is an electric model, something of a rarity when it comes to tankless water heaters.

It has an impressive 99.8% efficiency, but in terms of raw stats it doesn’t quite stack up to any of the others on this list. So why did I put it here?
Because of its intended use (as a Point of Use model) it’s VERY good.

I mostly talk about whole home tankless water heaters, but it shouldn’t be overlooked that for some purposes a point of use model will do you just fine. Running a single sink in your garage, or powering the shower or sink in your RV, that kind of thing.

This one is PERFECT for that, and as point of use models go it is very high performance. It has a somewhat above average GPM, stellar efficiency even by the standards of most electric models (they hover around 98% on average), and are often easier to install than propane or natural gas model (though unless you’re an electrician I’d still suggest getting a professional to install this for you).

For what it is, I greatly suggest this. The price is low and it serves its purpose more than well enough.

In many cases with tankless water heaters you don’t NEED top of the line. Anything beyond the maximum average water usage of your household is completely wasted power, after all.

If you only use 5 GPM on average, having a 6.6 GPM tankless water heater might be justified for somewhat above average usage or accounting for efficiency drop in the winter. But if your average usage is 5 GPM…well, you’re NEVER going to need a 9.5 GPM heater: simple fact.

In this case, you have a roughly average 81% efficient non-condensing heater that clocks in at 8.4 GPM and 180k BTuH, which is perfect for large homes in warm climates, and the average home anywhere relatively cold (the GPM will drop to about 6.6 or a bit lower if you need to raise the water temperature by 45 degrees or more).

In addition to these basic stats, this has the same recirculation kit our winner shares, along with the hot start technology, a water saving setting that turns the flow way down low until the water heats up (I’ll talk about that more in detail below), and the automatic maintenance notification.

This is an outdoor unit, which may look unsightly so make sure you, put it somewhere relatively unnoticed. Thankfully it has both the digital controller and mobile app connectivity features to prevent you from needing to go outside to adjust the temperature.

Finally, it has light commercial application as multiple units can be linked and synced to the same controller, allowing an increase in output. Given this is very cheap for the overall performance (under $900), I could see myself using this if I had a business that required more than a sink and shower to run.

If you’re looking for a cheaper, but still good home option, this is a good one.

Its basic stats are nothing to laugh at: 8.4 GPM at a 35 degree rise (6.6 GPM at a 45 degree rise). That’s a precipitous drop in GPM largely because this is a non-condensing tankless water heater, which are significantly less efficient.

This makes it not great for colder climates, and even though it shares the same recirculation kit option and “hot start” programming as our winner I definitely wouldn’t recommend it for anywhere the groundwater is colder than 50 degrees.

Still, it actually has one very desirable feature that could potentially recommend over the winner: “water saver” settings, that restricts the water flow until the water is properly heated up. This can save A LOT of money on wasted water in the long term, especially since it has the same industry low minimum GPM rates (.4 GPM, a little more than a trickle but less than a sixth of the full blast of a faucet) most Rheem tankless water heaters share.

It’s not the best tankless water heater I’ve ever seen, but it’s far from the worst, and it’s hard to argue with it being a bit more than half the price of our winner.

This was almost the winner.

This is, in many ways, functionally identical to our winner. It has all the same basic stats. 9.5 GPM, 11k minimum BTuH, 199k maximum BTuH, 93% efficiency, the whole nine yards on basic performance.

As far as amenities it has all the same extra features: water save, recirculation pump kit, “hot start”, automatic maintenance alarm, ability to string multiple together for higher demand, the whole nine yards there too.

They’re similar because they’re very close to the same model. This is basically the older version of our winner. The main difference here is venting. Not something I usually talk about because venting is usually pretty standard.

Our winner has better venting. That makes it less likely to overheat, easier to install (FAR easier), and better at venting gasses away from your home. That’s about a $400 difference in price there. I waffled on whether it was worth it but eventually concluded that all things being equal…yes.

The saved effort on installation if you choose to self-install and increased safety (even if it is only by a margin) was worth the price bump when factoring in that it’s also a new model with all that entails (it’s likely to be supported further into the future if you need replacement parts years down the road, for example)

If you disagree, that’s understandable. Everything else here is the same in terms of performance save the new-ness and its venting, and if you want to save that $400 I can’t really blame you.

As mentioned, this is basically a tie between the RTGH-95DV and RTGH-95XL (the older model), with the RTGH-95 edging out the latter because it is newer and likely to be better supported going forward.

It’s hard for me to call either a clear winner because while I cannot overstate that the price difference is a big deal, I also can’t help but think how many times I’ve bought appliances 10 years out of date that I LOVE…and find it to be an unimaginable hassle to get parts to fix it or things as simple as vacuum bags needing to be custom ordered for an old (but still, to me, better than anything on the market today) vacuum cleaner.

When you’re looking at a product that should be lasting 15 years at a minimum that $400 price difference starts to look very small in the grand scheme when compared to potentially needing to replace the unit outright because you can’t get any support to repair the darn thing.

As for the rest, they all serve a purpose for some of you out there. I can’t help but reiterate that Point of Use models are insanely useful for certain projects and locations and that the 84 models are usually going to be better for any home with less than 4 bathrooms in a warm weather climate.