So today we’re going to take a look at some good options from a brand that tends to favor few frills, but plenty of performance: Takagi.

Takagi makes some of the best tankless water heaters there are for home use. While others do it better in terms of tankless water heaters for businesses, few can completely overmatch Takagi when it comes to getting you convenient, reliable hot water for your home. Today we’re going to look at my five favorites, their specs, and what makes them that way.

I use a few uncommon abbreviations and terms in this article, which I’ll quickly explain here:

British Thermal Unit (per hour), the amount of heat required to heat one pound of water one degree. The higher this number, the hotter your tankless water heater.

Gallons per minute. In this context, how many gallons per minute a tankless water heater can effectively heat without starting to output cold bursts. Bigger is better, once again.

A condensing heater keeps the propane or natural gas more highly compressed, resulting in more efficient heat output that isn’t as affected by the weather. Non-condensing units (the majority) lack this feature and may perform up to 50% less efficiently in cold weather. 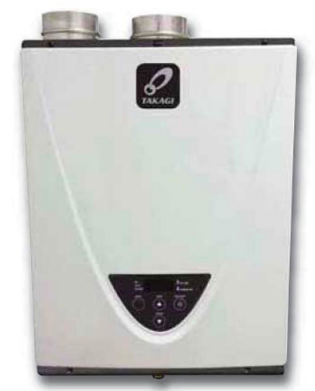 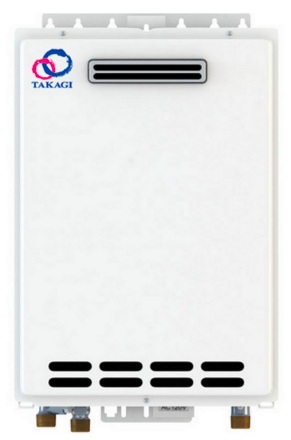 This is pretty much everything I look for in a tankless water heater.

It has the power (199k BTuH max, 19.5k BTuH minimum) and the flow (10 GPM), first off, which is hard for most tankless water heaters to match. That’s powerful enough for pretty much any purpose (whether you want to use it for light commercial or residential uses).

For reference, that’s enough to comfortably heat four sinks or showers simultaneously about 30-40 degrees above the groundwater temperature. More than enough for any home or floor of a business.

On top of that it boasts low NOx emissions and an efficient condensing propane heater (93% efficient) so you can be sure you’re getting the right bang for your buck.

“Safety” is a big theme here as well: it’s protected against both extremes of temperature (having both freeze protection and automatic shutoff when overheating), surge protection, the aforementioned lowered NOx emissions, and a corrosion resistant heat exchanger.

Takagi makes their products to last, and backs that up with a 5-year warranty on everything (15 years for the heat exchanger if you’re using it in a residence). Rounding things out is a very reasonable price (a little over $1100). All in all, it’s very hard to do better than this in terms of tankless water heaters, especially in that price range.

For an in-depth review of this product, check out: Takagi T-H3-DV-N Condensing

A step down in capacity, a step up in efficiency.

Back to more warm weather models, we have this. While the K4 is almost identical in price and performs better in colder climates (having a higher heat output), and the KJR2 is cheaper, I feel this has something to recommend it over both as a warm weather option.

Primarily, it’s because it’s an efficient model. Being a condensing unit makes it jumps up to a pretty impressive 95% efficiency rating (still below the average for an electric model, of course, but still quite good for propane or natural gas), which somewhat offsets its rather lackluster 6.6 GPM (though that’s still enough for a small house) and middle of the road 160k BtUH output.

Basically what this means is you get a lot more bang for your buck, and the relatively small (in the grand scheme) pricing difference means it will pay for itself over time in saved cost in propane or natural gas. That’s 15% more efficiency over the competition, which while not a DIRECT 15% reduction in cost saved is still a significant amount you’re going to rack up over the long term.

Given it also has the 15-year limited warranty on the heat exchanger (and 5 years on parts) with the multiple protections against freezing, overheating, and surges or lightning strikes, you’re going to be racking up those savings over the long haul.

For the price, you could do a whole lot worse.

While not the powerhouse of our top pick, this Takagi still performs extraordinarily well. It has 140k BTuH output and 6.6 GPM of flow (about a sink and a shower’s worth, plus a dishwasher at the same time). The only real downside to the 140k BTuH is that means it’s naturally going to perform worse in colder climates, as it struggles to heat colder groundwater.

Since it’s non-condensing this type of heaters are naturally less efficient (this one is only 79% efficient) and lose even more in cold weather.

Basically, this is great for somewhere warm like I live, since it can heat your whole house’s worth of water, but if you live up north somewhere it’s better to give this a pass.

Still, it’s hard to complain too much. It still has a 5-year limited warranty, and up front it will run you less than $600. Not a bad deal at all, in my opinion.

A step up from the KJR2, but still has some flaws.

This one is a bit more powerful (190k BTuH max; minimum 19.5k BTuH), a bit more efficient (80% efficient; I DID say it was only a bit), and has quite a bit more flow as a result (8 GPM). Much like our winner, it has a few safety precautions: namely it is protected against freezing, overheating itself, and against surges of power.

These incremental changes overall result in a whole that is bigger than the sum of its parts, however, as it becomes a much more powerful machine than those small boosts might suggest.

It performs roughly as well in warmer climates (it suffers from diminishing returns in warmer climates where the KJR2 can easily service a whole house already), but works astronomically more efficiently in colder climates, being able to run two showers at once (or a shower and a sink, sink plus dishwasher plus washing machine, or any combination of likely household use you can think of) without overly straining the machine.

I recommend it over the KJR2 by far if you live somewhere with colder groundwater. There’s roughly a $300 difference between the two, the K4 running close to $900, but that’s somewhat irrelevant when we’re discussing something that simply does not function properly in certain areas versus a more expensive product that DOES.

The main problem is it is still a non-condensing heater, and therefore losing out on a lot of efficiency in terms of energy in to heat output.

The only real major drawback is that it’s non-condensing.

This one has an interesting temperature range, with a minimum of 11k BTuH (I’m honestly not entirely sure WHY you’d ever want to turn it that low, but it’s an option) and a max of the more standard high-end 199k BTuH.

With a 10 GPM flow it rounds out the two primary factors that gave our winner the top slot, so what holds this one back to second place? Well, a number of factors, starting with that it’s non-condensing.

As I tried to stress above, being a condensing heater is a huge selling point: it saves cost, it increases the effective range of temperatures you can achieve, and widens the area you can properly make use of the unit’s power.

Non-condensing units lose 50% of their already lackluster power in colder climates. 80% energy efficiency, in this case, becomes an abysmal 40% energy efficiency. Along with that loss of efficiency comes a loss in raw effectiveness: 10 GPM is halved to become, effectively, five. You require more energy (and thus burn up more propane) to achieve an even lower level of effectiveness.

So while this unit can run four showers in colder climates without breaking a sweat, it’s down to two in the cold.

This is still a great unit for a multitude of reasons, almost all of which it shares with our winner: it has freeze protection, overheat automatic shut off, and surge protection along with the very good 15-year and 5-year warranties on its heat exchanger and parts respectively (with the same downgrade from 15 to 5 years on the heat exchanger for commercial use).

But the lack of a condensing heater, even with the $200 cheaper price tag than the H3, hurts it just a little too much. If you have a huge house in a cold climate this is an excellent heater, but if you’re in colder weather there are much better units (from Takagi themselves and other manufacturers), and for a smaller house it’s overkill.

It is far outperformed in efficiency by the H3 then make sit worse for businesses as well, and so it naturally gets bumped down a spot.

Unlike many other products, tankless water heaters don’t usually have a clear winner for everybody. My top pick for this kind of product almost always comes from looking at how many DIFFERENT jobs it can perform (and perform well). For this reason, the Takagi T-H3 takes my top slot.

It simply does everything besides large commercial uses (which very, very few tankless water heaters from any brand can boast). It works for any kind of home or small business in any kind of climate you could care to name.

HOWEVER, tankless water heaters do suffer from diminishing returns; that is, once you find a water heater that can effectively meet your needs, anything more than that is a complete waste. For that reason, any of the other tankless water heaters on this list would be good for somebody in some situation or another. It entirely depends on where you live, your personal water usage, and your climate.

Of these, the KJR2 and K4 are what I’d eyeball as the best runners-up. They perform at opposite ends of the spectrum. The former is a cheap, warm weather only model that is used primarily for small homes or single bathroom offices. The latter is a good cold weather option for any small to medium sized home or office and will run you mid-range pricing.

The other two not mentioned are fine in their own right, and the D2-OS is the second best in raw performance, but from the perspective of the average person the other two are either too niche (too powerful for small homes, not powerful enough for large businesses, leaving them largely as useful for people with huge homes that have at least four bathrooms) or don’t perform ideally in the climate they may live.